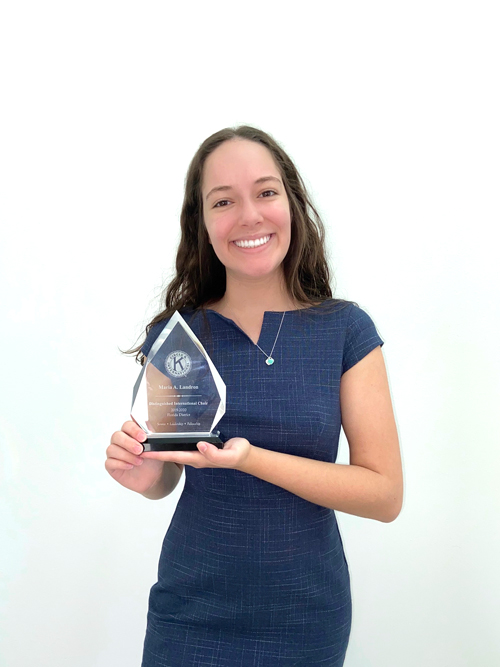 Over the past year, Landron worked closely with Circle K in Nepal to provide training and development to leaders there, worked with the Latin American region to provide leadership trainings and hosted a recognition ceremony for members from places such as Nepal, Japan, Taiwan and the Philippines. With the European region, Landron researched how Circle K could better adapt to the university system there, where extracurricular activities are more community-based, rather than embedded in university life.

Circle K International recognized Landron with the award during a closing session of its convention held in July via Zoom. Additionally, Landron was re-elected to her role as a member of the International Board of Trustees and appointed to be on the Executive Committee, spearheading strategic planning.

Landron, a public relations major from Royal Palm Beach, started the CKI chapter at Palm Beach Atlantic as an incoming freshman. As a student at Royal Palm Beach High School, Landron served on the board of the Florida District of Key Club International, the high school equivalent of Circle K International. Her involvement with the organization helped her develop a sense of community after moving to the United States from the Dominican Republic when she was 11 years old.

Also at Palm Beach Atlantic, Landron is one of two Freidheim Fellows conducting an independent study. She will present her findings on her topic, “Beyond the Wall: Mexico and Central America,” 7 p.m. Oct. 1 as part of the virtual Homecoming and Family Weekend celebration.