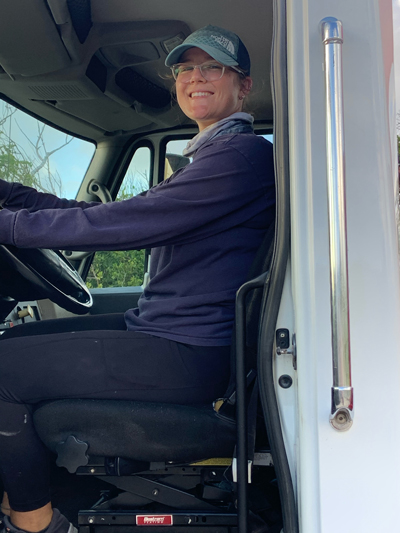 The senior environmental science major planned to conduct research for Palm Beach County Environmental Resources Management on her summer break. But the Lord — and COVID-19 — had other plans, plans that put her in the center of a spiritual revival on an island neighboring her own.

Nearly every night, Phillpot’s parents had been feeding Samaritan’s Purse teams, who were on the ground helping the islands rebuild from the devastation of Hurricane Dorian. Their own home suffered extensive water damage from a neighbor’s roof that blew off and hit theirs.

“We would have everybody on our porch and share a meal,” Phillpot said.

There, Phillpot met a private contractor who runs heavy equipment for the Christian relief organization, and he offered her a job. In her first stint over spring break, Phillpot used a tank-like truck to rebuild Man-O-War Cay’s dune. Hurricane Dorian destroyed the dune that protected the houses behind it from getting washed away, Phillpot said. 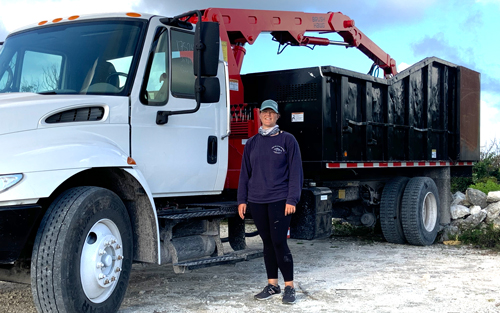 When her summer job fell through due to COVID-19, she shimmied behind the wheel of a grapple truck, hauling away trash and debris from neighboring Guana Cay.

“I had never driven anything other than a stick shift car,” Phillpot said. “I was the only girl on the team, which was super fun, because no one expected a girl to be driving this giant truck.”

Now back at PBA, Phillpot said the job was an answer to prayer financially and spiritually. She had been praying “God, I need you to give me a purpose.” The same contractor who hired her to run the machinery asked her to lead worship for a church that he started under a pavilion that used to be a restaurant. 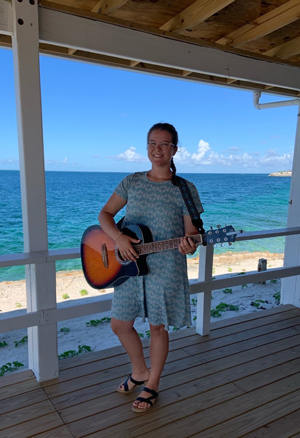 Guana Cay’s reputation had always been the island with the best bars. The lack of Christian influence, coupled with the destruction from the storm, left residents of the island hungry for spiritual nourishment. The storm left them with nothing. No homes. No jobs. No hope.

Fifty people — many of whom had never set foot through the doors of a churchnot, even at Christmas — came the first week, Phillpot said. In the new church meetings, one man recorded the music on his phone every Sunday so that he could send it to a relative who was sick. Phillpot has witnessed him and others grow in faith and relationships with one another.

“I felt like I met completely different people, people who had rekindled their relationship with the Lord,” Phillpot said. “It was absolutely amazing that there was such a revival going on.”

A Bible study that began in May has continued over Zoom, allowing the church to connect with a greater number of people. Internet service is spotty at best, and many people who are still without electricity run their generators to participate, Phillpot said. 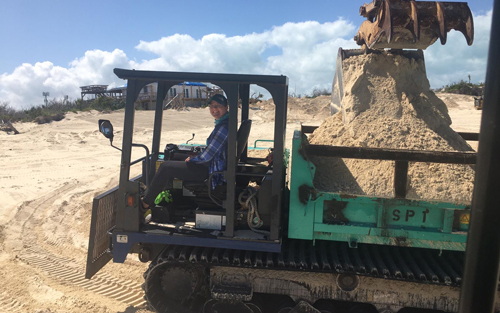 The experience with Samaritan’s Purse afforded Phillpot an opportunity for vocational discernment. She discovered that she really enjoyed working with heavy equipment — something she never would have thought to do, she said. She dreams of working with an organization such as the National Forest Service or the Army Corps of Engineers. She plans to stay involved with Samaritan’s Purse and children’s ministry opportunities.

But she’s learned to hold her plans loosely.

“The theme of this year has been that man makes plans, and God just laughs, because that’s not what He has planned,” Phillpot said. “It’s blessed me in so many ways.”

Photo 2: Abby Phillpot drove a grapple truck used to haul away debris. A Samaritan's Purse contractor hired her to operate heavy machinery over her spring and summer breaks at home in the Bahamas.

Photo 3: Abby Phillpot played the guitar and sang for worship services in an outdoor pavilion that used to be a restaurant.