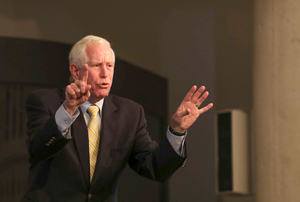 Dr. Tom Tewell redefined success based on the teachings of Jesus rather than the ways of the world during his chapel remarks Monday, the first in the inaugural Madeline McElveen Distinguished Preacher Series.

Tewell is one of three renowned preachers in the series made possible by McElveen’s children, 2018 Women of Distinction honoree Bonnie McElveen-Hunter, Tweed McElveen Bogache and Dr. John McElveen. The Center for Biblical Leadership is a sponsor of the series.

University President William M. B. Fleming, Jr. described the guest preachers as “disciples of Christ with an evangelical fervor” to teach God’s word. Tewell has pastored the 5,100-member Memorial Drive Presbyterian Church in Houston and the 3,500-member Fifth Avenue Presbyterian Church in New York City, as well as congregations in Pennsylvania and New Jersey. More recently, Tewell founded Macedonian Ministry, which supports 300 pastors in a 3-year preaching and leadership program.

Tewell's remarks centered on Mark 10:35-45. In the passage, disciples James and John asked Jesus for a place of honor beside His throne. Their request for power and prestige came after a poignant moment when Jesus had predicted His own death.

Jesus reminded the brothers that the rulers of the Gentiles lord their authority over the subjects and that “it shall not be so among you.”

“Anything you have been given — academic excellence, athletic prowess, the ability to make money — is not for your own aggrandizement,” Tewell told students. “It’s a platform for service.” 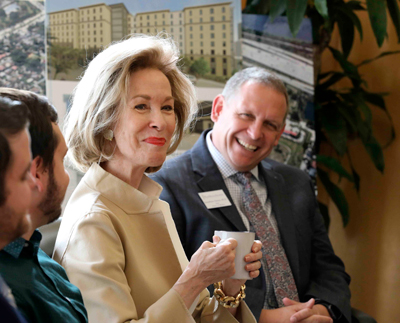 Tewell illustrated his point with a vignette from former Archbishop of Canterbury William Temple. The archbishop’s story was about vandals who broke into a shop but refrained from stealing anything. Instead, they rearranged the price tags and watched with glee the next morning as shoppers found expensive items marked with low prices.

In the same way, Satan has broken into God’s world and rearranged all the price tags, Tewell said. Culture places a low value on what God holds in high esteem, such as a committed marriage or service to the poor. As Christians, our calling is to put the price tags back where they belong.

Fred Rogers, an occasional presence at Fifth Avenue Presbyterian Church, did just that when he rode the New York City subway 64 stops north to visit children in Mott Haven, the poorest congressional district in America. Rogers explained “the best thing I can give them is myself.”

Rogers asked the public school children their names, dreams and what they would do if they knew they couldn’t fail, Tewell said.

“Nobody had ever listened to them,” Tewell said.

Rogers ended with a sermonette, telling the children if they wanted to succeed, they needed to stay in school, serve others and put their faith in God, Tewell recounted.

On another occasion, Tewell conversed with a homeless man named Joe who slept on the steps of his church. Joe started reading the Bible and attending church. He questioned Tewell about whether he could take communion because he had a list of sins a mile long. Tewell said he had a list, too, and suggested they rip the bread for one another as a symbol of the forgiveness that they have in Christ.

The church eventually hired Joe to direct a budding ministry to homeless people. He called them to their best, to give up drugs and alcohol and to be good citizens, Tewell said.

“He learned to spell success s-e-r-v-a-n-t,” Tewell said. “It was life-changing.”

Likewise, Madeline McElveen, for whom the preaching series is named, was a servant leader.

“She thought of herself as an ambassador to God in every situation she walked into,” Tewell said.

Her daughter, Bonnie Hunter-McElveen, was like-minded when she served as the United States Ambassador to Finland. She was an ambassador to God first, Tewell said.

Tewell ended with a challenge for students.

“You may be called on by God to take an upside down world and turn it right side up again,” he said. “How do you spell success?”

Photo 2: Bonnie McElveen-Hunter and School of Ministry Dean Dr. Jonathan Grenz, along with a group of students, meet with Dr. Tom Tewell prior to his remarks in chapel on Monday, Jan. 13, 2020. Tewell was the first speaker in the Madeline McElveen Distinguished Preacher Series, which is named for McElveen-Hunter's mother.